KUCHING: Kuching FA have reached new heights by qualifying for the Malaysia Cup for the first time this year in their first season in the Premier League. The team earned a promotion to the national second-tier league after finishing second in the M3 League last season. 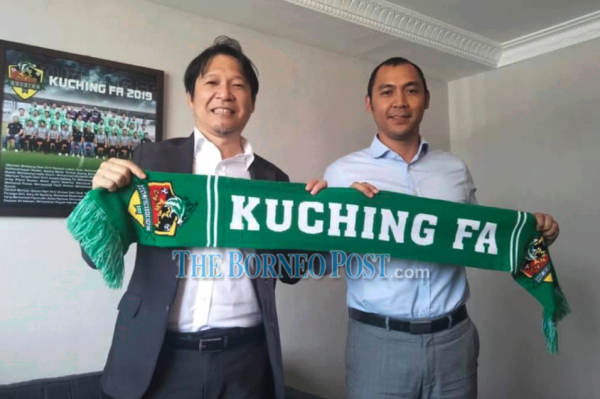 Kuching FA defeated Johor Darul Takzim II 2-1 at home on Oct 4 to guarantee a top-eight finish in the standings and qualified for the nation’s oldest cup tournament. They still have one more league game to play against Kuala Lumpur, which was postponed early this month and is expected to take place before the Malaysia Cup kicks off on Oct 25.

Yakult (Malaysia) Sdn Bhd serves as one of the sponsors for Kuching FA and the company, known for its world leading probiotic drink, has formed a unique collaboration with the team. Its Managing Director Hiroshi Hamada played a key role in bringing Japanese head coach Akira Higashiyama and import players Yuta Suzuki and Yuuki Tanigawa into the team last year.

“I’d like to express my warmest congratulations to the team for securing a seat to compete in the Malaysia Cup so soon. They showed great teamwork and fighting spirit.”

“In just five years, the team has moved from playing in amateur league to qualifying for the Malaysia Cup, which is great achievement to be proud of,” he said in a statement.

Beside the signings of the head coach and import players, Yakult has also been providing its probiotic drinks to the Kuching FA players on daily basis.

“I hope through the continuous consumption of Yakult probiotic drinks, it helps to improve the players’ immunity and reduce the risk of infections, especially during this (Covid-19) pandemic,” said Hamada.